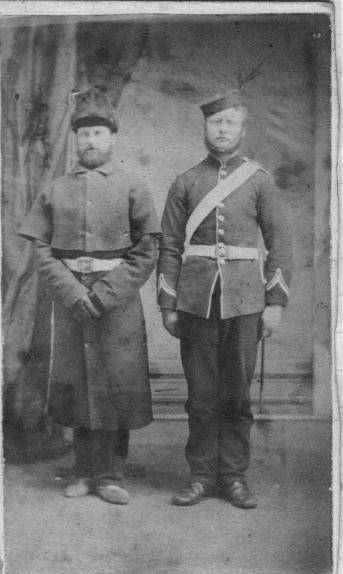 Thomas Graham Morry III (Private No. 714) joined the Provisional Battalion of Infantry (PBI) of the Active Militia of Canada in Montréal on November 12, 1872. What compelled him to do so was no doubt in part a sense of adventure but also the practical possibility of acquiring a land warrant for 160 acres of prime Canadian farmland as his reward for service. As it turns out, he was done out of his rightful reward by an already stultified and uncaring federal bureaucracy. But then, if it hadn’t worked out that way he may never have returned to Newfoundland to raise his family and none of us would be Newfoundlanders! 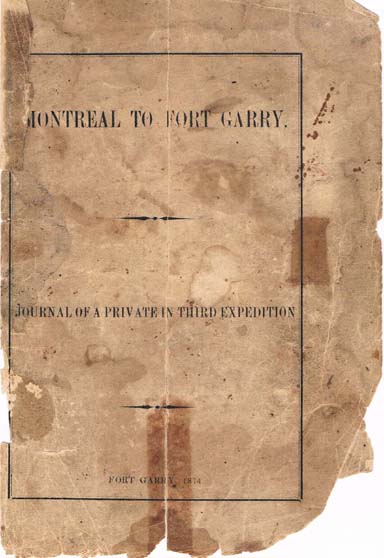 Cover of Thomas Graham Morry’s copy before and after restoration

TGM III recorded the story of the trip from Montréal to Fort Garry in a book he auto-published in 1874 in Fort Garry before returning home. Click here to view the story.

WARNING!!! This is a very large file and will take some time to load

There are only two copies of this book known to be in existence today. The first (see B&W) photo above) was discovered to be in the library of the seminary in Québec City but was since transferred to Laval University for preservation. This copy was subsequently transferred to the Museum of Civilisation Library in Québec City (not to be confused with the National Museum of Civilisation in Ottawa). It was this copy that was digitized some years ago by the Canadian Institute for Historical Micro-reproductions and copies in digital form therefore are now available in several libraries across the country and elsewhere in the world.

The second copy (see coloured images above) was the personal copy that belonged to Thomas Graham Morry himself and for years it was not known where this copy had ended up. The notes accompanying the download above record the fascinating story of how that copy was found and ultimately professionally restored by the conservators at Library and Archives Canada, where it has now been donated on behalf of the family to ensure its survival for future generations to enjoy.

Here is an interesting (if slightly inaccurate) account concerning the house of Thomas Graham Morry, written by Jean Edwards Stacey for the Evening Telegram in 1997. Click Here

Fund Raising for the C of E Orphanage, Christmas 1906

This postcard was sent along with at least five others to other recipients evidently (judging by the message), by Thomas Graham Morry III in December 1906 as part of a fundraising drive in support of the C of E Orphanage. The drive was under the direction of Rev. C. V. Cogan, previously the Pastor at St. Thomas from 1900-1902 but who was working at the Cathedral by 1906. The C of E Orphanage was built in 1855 was still in operation more than one hundred years later.

Old Tom was trying to encourage his relatives to follow suit and order a packet of six of these cards from the manufacturer in what was essentially an early version of a chain letter. Though postmarked in St. John’s, T. G. Morry was still living in Ferryland at this time. In fact, he was the postmaster there. The recipient, in this case, was Mrs. William Bradshaw in Placentia. She was née Sarah Payne Windsor of Aquaforte and was a first cousin, once removed, or a second cousin, once removed, of T. G. Morry by two different lines of connection between these two oft-intermarried families. Obviously, he was reaching out to as many of his relatives as he could to make the funding drive a success. He was known in the family to be a staunch C of E man, despite having married a Roman Catholic and agreeing to raise their children in that faith.

I came by this postcard in a strange sort of way. In 2017 I met for the first time John Wheeler, a great-grandson of Sarah [Windsor] Bradshaw, due to our being connected with one another by Barb Prescott, a dedicated volunteer at St. Luke’s Anglican Church in Saanich, a suburb of Victoria, B.C. It so happens that my great grandfather, Thomas Graham Morry, and John’s great grandmother, Sarah Payne [Windsor] Bradshaw, are both buried in the same grave in the churchyard of St. Luke’s Church, even though they were both Newfoundlanders. Sarah’s sister, Clara, was a childhood sweetheart of Tom’s and after their spouses died, they got together very late in life in Saanich and married one another. Sarah’s husband, a sea captain, had also died and she then moved with her eight children to the same area, but much earlier in the early 1900s. On our first visit together, John and his wife Shannon floored me by giving me this postcard which was amongst John’s mother’s heirlooms when she died. I am overwhelmed by their generosity in doing so.

This letter from Thomas Graham Morry in Victoria to his granddaughter Phyllis in Ferryland was the last letter he ever wrote. Six days later he died. Though he mentions a recent illness in the letter, his expectation of travel to the lake (Lake Cowichan ?) the following week and an impending election makes clear that he anticipated being around for much longer. Here is a transcript of the letter. A few words are not entirely clear but the main topics come through fine.

Last Will and Testament Plus Codicil

Here is the Last Will and Testament of Thomas Graham Morry (1849-1935), transcribed from a photocopy made at the Probate Office of the Newfoundland Supreme Court in August 2001. This transcription also includes the Codicil which amended the original bequests.

A letter from James Stewart, newly appointed Pay Officer in Newfoundland, to Rt. Hon. Robert Dundas seeking to spend his first winter in London in an advisory capacity thereby delaying the inevitable adaptation of the Newfoundland climate. Scottish Interests in Newfoundland.

Two letters related to an aging Barrack Master, John Lees, in St. John’s, essentially begging to be transferred back to Great Britain because of the effect of the “extreme severity of the climate” on his health. Scottish Interests in Newfoundland.

Here is a letter from the Scottish Record Office that concerns discussions over Newfoundland Confederation with Canada, not in 1867, and not in 1949, but rather in 1895. The sender and recipient are prominent figures in colonial affairs but apparently in South Africa, not Newfoundland, and this was included on the microfilm solely because of this topical discussion. Scottish Interests in Newfoundland.

A letter from Allan MacDonald, Commanding Officer of the Garrison in St. John’s, sent from London on December 1, 1767, to Sir James Moray of Abercairny offering his home in Newfoundland as a suitable place for the restoration of the health of the Laird’s son. Scottish Interests in Newfoundland.

A letter from a junior Scottish Officer, John Peeble, recounting the events of the Battle of Signal Hill from his personal observations. Scottish Interests in Newfoundland.

The remaining documents on the Scottish Record Office microfilm are an eclectic mix of unrelated information on a variety of subjects which are unrelated to one another except in that the pertain to Scottish activities in Newfoundland in the 18th and 19th centuries. The first of these is an anonymous transcript of the epitaphs of two Scottish officers who died in the Battle of Signal Hill. Scottish Interests in Newfoundland.

Here is the last of the documents on the microfilm from the Scottish Archives that pertains to the Rogerson family. It is a very brief genealogy of the family members who came to Newfoundland and was written by Col. William Rogerson of the 53rd Shropshire Regiment. Scottish Interests in Newfoundland.

A new letter to Samuel Rogerson, the Scottish clerk working for Messrs. Hunter & Co. in St. John’s in the early 1800s. Scottish Interests in Newfoundland.

After 7 months of long days and nights at the computer, today I have finally completed the transcription and publishing of my grandfather, Howard Leopold Morry’s 25 diaries as paperbacks and eBooks on Amazon and Kindle.

Gradually adding information to the page created to contain information other than the Morrys. Today I am adding Anna Elton-Morris’ excellent summary of the Windsor family of Aquaforte presented at the Windsor Family Reunion, July 29-31, 1988. Related Families

Following on with the documents found on the microfilm from the Scottish Records Office, here is a letter from Jean Rogerson to her brother Samuel in Newfoundland written almost exactly 200 years ago. Scottish Interests in Newfoundland.

Read here the fascinating story by Jennie Crisp of how she came upon the 200 year old bible given by Matthew Morry to his daughter Priscilla at the time of her wedding to William Sweetland and then meticulously put together the facts pertaining to all of those named in that bible. Bibles

Here is a second letter from the young apprentice, Samuel Rogerson, written a week after the previous one but destined to travel to Scotland at the same time. This one is written to his other brother, David, in Leithenhall and repeats much of what he has already said to William with a few minor additions. Scottish Interests in Newfoundland.

Following on with the documents found on the microfilm from the Scottish Records Office, here is one of two letters from a young Scottish apprentice to his relatives back home giving his first impressions of Newfoundland and Newfoundlanders. Hint: they are not very complimentary. Scottish Interests in Newfoundland.

Another letter found on the Scottish Microfilm suggests a connection to Russia in the trade that was being developed by certain Scottish merchants in Newfoundland in the early 1800s. In this case, it is the Rogerson family, which was well established in Newfoundland commerce and politics in the 19th Century. Scottish Interests in Newfoundland.

You are visiting the website of the Morry family of Newfoundland, ex Devon

We hope that this site will serve as a link and a gathering place for the scattered remnants of the Morry Family, whose ancestor, Matthew Morry, came from Stoke Gabriel via Dartmouth Devon, England, to Newfoundland to make a living in the fishing trade some time before Sept. 1784. At that time we know he was granted land for a fishing room in Caplin Bay (now Calvert) near Ferryland, a tiny fishing village on Newfoundland’s Southern Shore that we, his descendants, think of as our family seat.

All information on this website is © Christopher Morry 2003-2023
Home

Where to find me

Scroll Up
Manage Cookie Consent
To provide the best experiences, we use technologies like cookies to store and/or access device information. Consenting to these technologies will allow us to process data such as browsing behaviour or unique IDs on this site. Not consenting or withdrawing consent, may adversely affect certain features and functions.
Manage options Manage services Manage vendors Read more about these purposes
View preferences
{title} {title} {title}